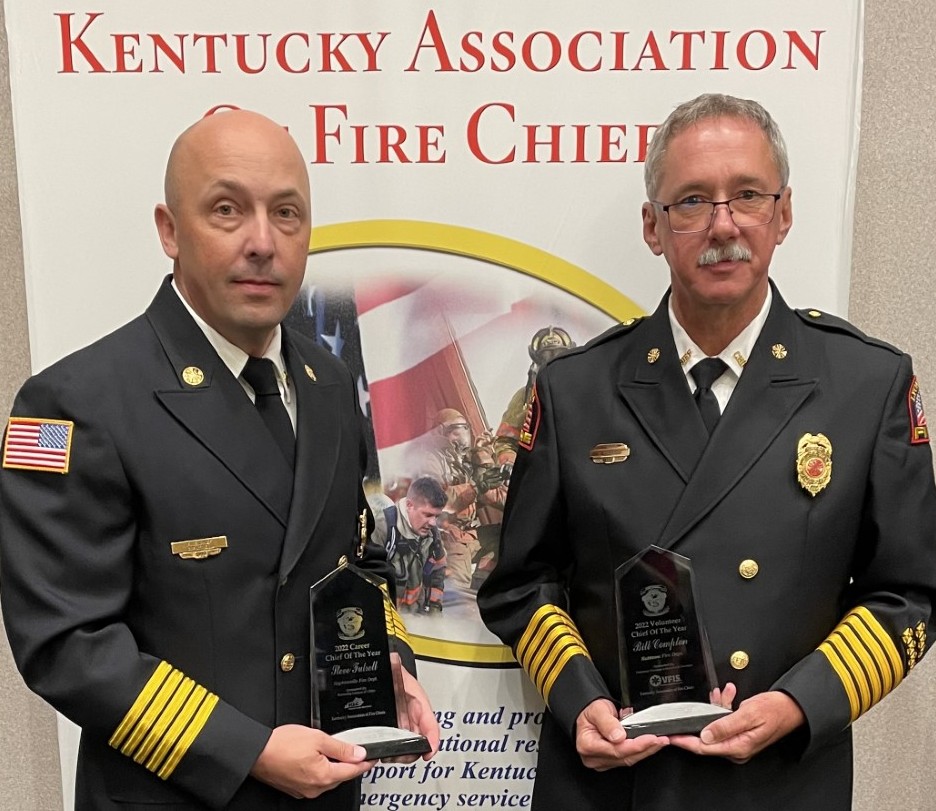 The Kentucky Association of Fire Chiefs has named Hopkinsville Fire Department’s Chief Steve Futrell as their 2022 Kentucky Career Fire Chief of the Year.

The Kentucky Association of Fire Chiefs is a professional organization composed of volunteer and career fire chiefs throughout the State of Kentucky. Each year, the Fire Chiefs Association requests nominations for this prestigious award. Following a record number of submittals, the Association ultimately selected Chief Futrell to receive this year’s award. He was nominated by Hopkinsville Fire’s Deputy Chief Bill Pyle, Deputy Chief Phillip Ferguson, Assistant Chief Chad Sivills, and Lieutenant/PIO Payton Rogers. In their nomination letter, Deputy Chief Bill Pyle had this to say about Chief Futrell: “Chief Futrell has shown great leadership throughout his career and journey to Fire Chief. He has proven himself through vision, persistence, and dedication to make the Hopkinsville Fire Department a better department.”

Chief Futrell started his career at Hopkinsville in 1999, ascending the ranks within the department, and eventually achieving the rank of Fire Chief in 2019. In addition to his role as Chief, he is also the EMS Director for the agency’s EMS Division.

The Kentucky Association of Fire Chiefs has named Kuttawa Fire Chief Bill Compton as their 2022 Kentucky Volunteer Chief of the Year. The announcement came at the Association’s annual Leadership Conference in Bowling Green, Kentucky on Wednesday.

The Kentucky Association of Fire Chiefs is a professional organziation composed of volunteer and career fire chiefs throughout the State of Kentucky. Each year, the Fire Chiefs Association request nominations for this prestigious award. Chief Compton was nominated for the award by Kuttawa Mayor, Barbara Campbell. In her letter for recommendation, Mayor Campbell applauded Chief Compton on his years of service to the citizens of Kuttawa and Lyon County not only in his position of Fire Chief, but in the many hats he oftentimes has to wear within the county. “Bill Compton, Kuttawa Fire Chief and Volunteer Firefighter recently received the Royal Lyon Awad for his 37 years of service to the Kuttawa community and Lyon County. This man’s dedication to his job and community is truly markable”, said Mayor Campbell.

Fire Chief Bill Compton has been Kuttawa Fire Chief since 2004. He has been employed with the Kentucky State Fire Marshal’s Office since 1996 and serves as a Deputy Fire Marshal in the Hazardous Materials Section.

PAST CHIEF OF THE YEAR WINNERS